The Q1 2011 edition of FJC Magazine featured a short interview with hog farmers, Jake and Jim Goaziou, in the article, Been There, Dune That! Below is an extended interview with the Goazious, in which they discuss their family life on a hog farm in Ohio, their experiences being subject matter experts on spit-roasting hogs, and the fun times they shared at Surf N Turf 2010.

It was the end of September, the leaves just starting to turn and the NorCal FJs making their last run in the Sierras for the season. The annual High Sierra run usually marks the last multi-day trail run for the year and makes for the perfect segue into Fall and planning and prep for the AllCal Republic's presence at Surf N Turf in November.

Among the many participants on the run was Jake "FJ Scout" Goaziou of Sacramento. Goaziou, the chief of Innovative Quality Concepts, had attended the first NorCal FJs Sacramento Meet & Greet and had made it a point to join in on an extended trail run at some point in the near future.

“Since I only knew a handful of the many members of Nor Cal FJs, I decided to attend the High Sierra Run to get better acquainted with the group,” said Goaziou. “After three full days in the High Sierras, I met some pretty cool people – one of which I met on the rugged 4x4 trail up to base camp.” That person happened to be Leonie Bowers of BozTec.

Goaziou and Bowers soon found they shared many common interests, including the love of grilling. “On our last day at the event, everyone gathered around the campfire and we had a huge BBQ where we cooked every kind of meat you can imagine. Considering my love of barbequing in the great outdoors, I kind of delegated myself to be the ‘cook’.  I’m not even sure how, but hog roasting came up. I had some real life experience to contribute to the conversation and next thing we all knew, we were going to do a hog roast at Surf N Turf 2010!” 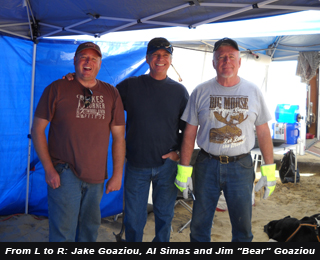 The Roseville resident grew up on a small farm in rural Ohio to parents, Jim and Sherry, who were ‘Hog Farmers’. The Goazious were hard-working farmers who oftentimes worked around the clock, seven days a week to ensure the farm remained productive and efficient.

“We lived a subsistence farming lifestyle. Planting and harvesting corn for the pigs, a full farrowing operation (where the baby piggies are born and raised), an acre-sized garden that encompassed every kind of vegetable you can imagine, plus sweet corn, a full-scale hay operation where you cut, bail and sell alfalfa and timothy hay bales and yes, plenty of pork chops and bacon!”

The elder Goaziou, also known as “Bear,” was, and still is, quoted for saying, “We ate bacon three times a day.” Jake continues, “Apparently that got around because before long we were providing whole hogs for hog roasts to churches, schools and various other functions.”

Jim adds, “One time, at a campout, so many people came that we were still feeding them at close to midnight after completely harvesting our garden and cooking all the vegetables.”

The effort that goes into roasting a hog can be very tedious and time-consuming, not to mention it is tough and dirty work. Oftentimes, people who had received a properly dressed hog from Jim had no clue how to go about roasting it. So, inevitably Jim would find himself working long, hard hours to dig out a proper roasting spit and spend endless hours masterfully roasting the beast. “And, of course, guess who was brought along as cheap labor!” chuckled, Jake.

“One week before Surf N Turf, I received a call on Saturday morning from a worried man who was hoping to serve up a roasted hog that evening,” says Jim. “After he explained what he was trying to do, I went to [his] home and did not get back to my house until midnight. The hog did, however, get cooked so people could eat at 9:00 PM, but it was some hard work.”

Fast forward to Surf N Turf. Jake invited Bear to California to help him out with the hog roast, which BozTec agreed to sponsor. “Jake inquired about hog roasting back in September and asked if I would assist him in roasting a 130 lb. grower on the beach. Living in the midwest, I had never cooked on a beach, but agreed to help out. I enjoy cooking outside.”

Jake and Bear arrived on the beach on Thursday afternoon to begin preparing the spit while others began the build-out of the surrounding AllCal Camp. The spit was integrated along the west side of camp and provided a nice “window” that looked out to the surf. The views provided a nice respite from the construction of the spit and the ensuing buzz surrounding the roast. Many attendees made a beeline to the spit upon arrival to find out when the hog roast was going to begin and to inquire about how the spit worked. 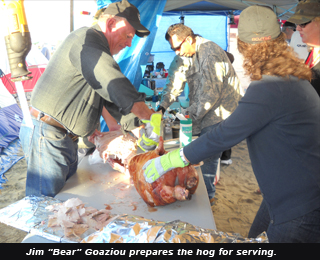 On early Saturday morning, 4:00 AM to be exact, Jake, Bear and a handful of volunteers placed the hog onto the spit and officially began the roast. It would be approximately 12 hours later when hungry attendees would get to enjoy spit-roasted hog as the main course of the BozTec-sponsored meal. And that they did. Hungry campers immediately formed a long line that extended into the heart of AllCal’s camp and just as soon began to inquire about seconds after partaking in the feast.

Jake and Bear were assisted by Jake’s wife, Blake, and her parents, Al and Barb throughout the day. Many members of NorCal FJs and SoCal FJCruiserForums pitched in to help as well, continuing the spirit of community and camaraderie that started earlier in the year at AllCal 2010.

By nightfall, there was hardly a sign that a hog roast had taken place outside of the many satisfied attendees lounging around campfires.

“In a word: WOW!” stated Goaziou, the younger. “What a great event to really cut loose and meet real people. I have seldom seen such a diverse group of people with the same passions.”

The elder Goaziou concurred. “I enjoyed the Surf N Turf weekend. It was amazing and enjoyable to see all the people who like to off-road and campout. The ocean was beautiful and all the people were very friendly.”

Luckily, it wasn’t all work for the Goazious. They managed to find time to enjoy the event and its surroundings. “We went four-wheeling, rode quads, went swimming (burr!), sightseeing, shopping in Pismo (for the ladies) and, of course, where else can you roast a full hog on the beach of the Pacific Ocean?”

As the sun set on the 2010 edition of Surf N Turf, Jake took a moment to reflect on his years back on the farm. “I learned by watching and doing and have had a few of my own hog roasts throughout the years.” Goaziou pauses a moment. “But none as good as my old man’s!” 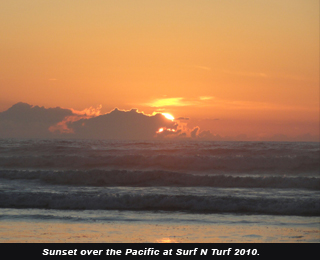 Comment by potatomutato on March 29, 2011 at 11:43pm
good times indeed! btw, i've included a link to the original article on FJC Magazine's website. Surf N Turf 2011 will be Pismo Jim's last SnT, so it's sure to be a doozy.