After coming home from work today I found a long dent (4-5 inches) on the rear driver side of the car--right above the stock fender flare.  It just bugs me that whoever did this did not even left a note.  The "scar" isn't too noticeable, but it is to me.  I don't mind if it was a well-deserved dent from the elements, but this is ridiculous.

Anyhow, I was thinking of getting those Bushwacker fender flares to cover up the dent, but have just began researching them.  Has anyone had good/bad experiences with these?  I figure I might as well buy something now that's functional instead of wasting money on fixing the dent.  Any feedback is greatly appreciated.

Also, I have a 2012 FJ and have not modified her yet, but was considering getting skid plates as my first real purchase.  I think am getting the mod bug, but I have no experience in taking my truck apart--aside from taking the bumper off while installing the hitch.  I want something easy to put on and take off.  I was looking at the ASFIR skid plates since it seems to be the only model so far that fits my year/model.  Any suggestions?  Thanks.

Permalink Reply by Robo on March 21, 2012 at 10:00pm
Believe it or not, Bushwackers were my first MOD. Installed them very quickly and with basic tools. Just use the rubber lining that came with them and it'll keep your paint looking new. I love them on most any trucks. Adds a lot of good contrast. I've never had a problem with mine, even after putting my truck on its side. Definitely worth it IMO.

Oh, nice!  I just checked out some pictures of your rig with them Bushwackers!  Looks very beastly.  Thanks for sharing your experience and for the tips on the rubber lining.  I didn't know it came with them.  Good thing to know so I don't have to order them extra.

Permalink Reply by paraextreme on March 22, 2012 at 1:37pm
I had a dent to but on passenger rear.unfortunately it was me that did the damage with my hi lift jack.i installed the bushwhacker funders and it just covered it.i got mine from streetside auto for.$ 335 shipped

Aww, too bad the price got higher and it's out of stock.  I'm considering getting it from amazon.com (since it has free shipping), or whether I should search ebay (yikes).

I could maybe knock that dent out for ya... post up a pic

Here's a pic of the dent.  It's actually not that noticeable, but it's there nonetheless.  Oh well, it was bound to happen sooner or later.  Thanks for offering to help. 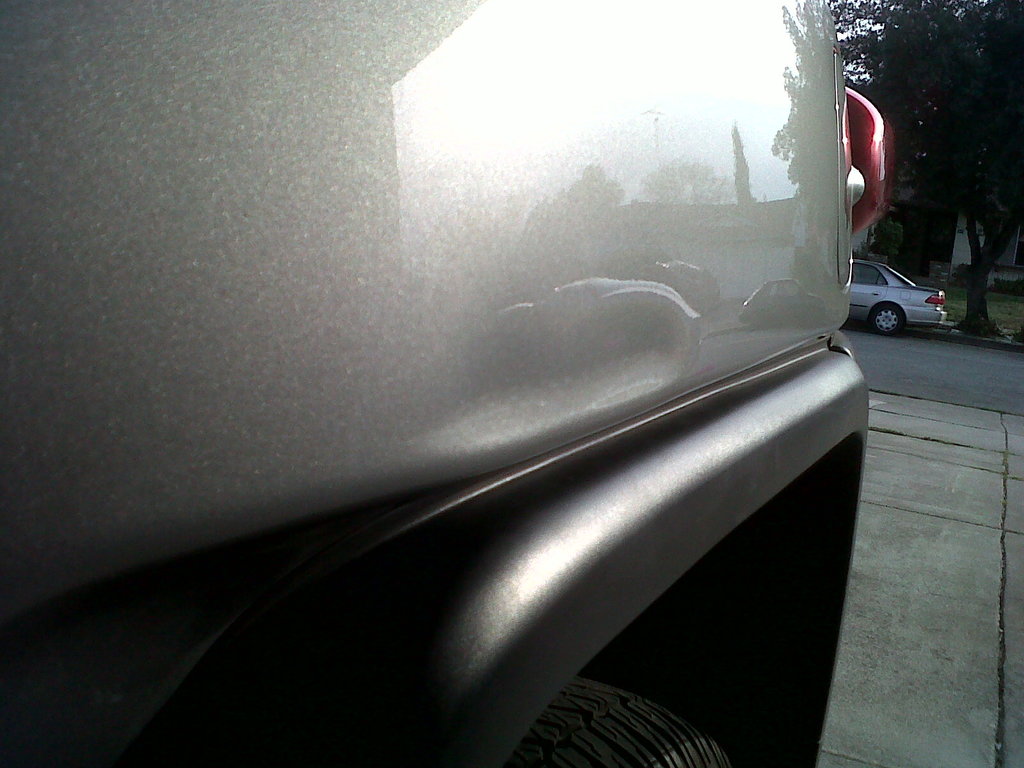 Have you added sliders yet? I'd go that way for protection 1st. That was my 1st mod, and I needed them on my FJ's 1st trail run.As to the skids, ASFIR is fairly expensive (gotta love the name though). Other brands should fit the 2012 FJ. If you don't plan on semi-serious rock crawlin too often then Ricochet would be far less expensive for aluminum skids.My personal vote would be Bud Built though.  Check out some of the debates on the BR: http://www.fjcruiserforums.com/forums/4x4-off-road-tech/144065-best...

I haven't added the sliders yet, but you're right, it's probably a good idea to get that on first.  Thanks for the links by the way.  Haha, ASFIR is a funny name (especially for something that covers your underbelly...and am not talking about the truck's!) and it is expensive.  Yikes!  It's twice as much.  I like how the Bud Built looks, but I'll definitely read the FJ forums and research some more about them.

Did you choose Bushwacker fender flares to install on your ride? I like the pocket style, it looks great. what style did you put on your ride by the way?

Just FYI, the post you are replying to is 5 years old.